Looking for a job is pretty stressful and part of that stress is generated by applications. After all the hours you spend crafting a perfect resume and a portfolio and other materials, all you want to do is go find things that look interesting, attach your carefully curated information, and then go spend your time elsewhere.

I have never liked writing job application materials for myself. And the cover letter is one of my most dreaded. For me, it’s impossible to feel good about myself while I’m writing the cover letter. Sometimes I am a little proud of the final result, but I always feel like an exposed dork once it’s been sent off.

Talking about yourself and your accomplishments is hard enough. Doing it in an engaging and meaningful way is difficult. Then, when you don’t get asked for a first round of interviews or receive a form email politely rejecting you, you have to wonder…did anyone read that cover letter in the first place? Are you screaming into a void populated by robots and keyword checkers?

How social media made my blood pressure rise (this time)

I started thinking about the usefulness of cover letters recently as I always do when job searching, and then I saw this post on LinkedIn about whether cover letters are necessary.

I thought people might have some interesting insights on how useful cover letters were, so I dove into the comments. And…yikes.

Granted, there are probably plenty of job searchers who just stick a copy/paste cover letter on a resume and move on with their lives, but come on! To just say, “Well they wrote one so they probably care more than everyone else” and then never read them? I don’t like this.

As if reading my mind, LinkedIn then recently showed me this other post:

I actually find this post hilarious (the author is obviously tongue in cheek here), but it is depressing that the idea cover letters are never read is so pervasive this guy can make a successful joke about it.

Curious about what the people in my life think about this stressful piece of writing, I took to social media.

Conducting some important and scientific research

When I posted a Facebook status asking people what they thought about cover letters, I had no idea the variety of responses I’d get. It turns out my friends are thoughtful humans and all of them had great stuff to say. I had a lot of responses from people who’d hired others and their thoughts on a cover letter’s usefulness.

Some of the points made about how cover letters can be useful:

Basically, a good cover letter can help highlight who you are and if the hiring manager reads the letter, it helps them get to know you better and improves your chances.

When cover letters are not so useful:

I want to note that all the above points are great but they are coming from hiring managers. The comments from jobseekers largely said they’d rather not write them. I got a great point that requiring cover letters can be too high a barrier for some applicants and cause extra stress for people who are neurodivergent. Should they pretend to fit the ideal candidate role to get an interview? Is this disingenuous? Will it end making them a bad fit?

A couple people commented that they suck to write but seems like including one increases your chances of getting contacted. Right? Right? 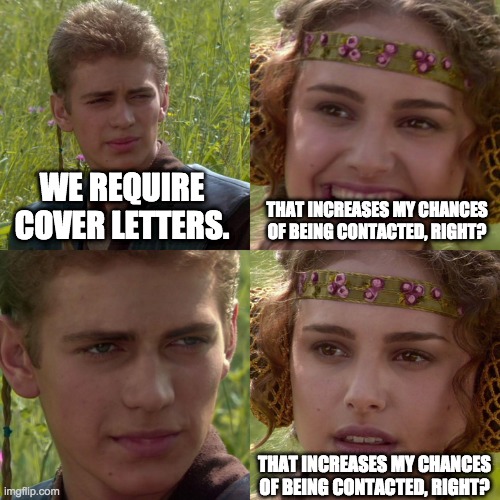 My own cover letter results

Because I’m a huge nerd, I kept track of my current job search in a spreadsheet. I noted the job, dates applied, when I heard back, and whether I wrote a cover letter.

Which I guess means I had a higher success rate for jobs I didn’t write one for?

Part of this is because I tend to write cover letters for jobs that are more outside of my wheelhouse or are maybe a touch beyond my experience. I’m trying to provide the extra context to show I’m a good fit. But I get weeded out for whatever reason.

This is fine, but it can be sort of demoralizing. Some of the cover letters I worked hardest on, tried to be the most clever with, tried to really show who I was and what I could do got met with nothing but a rejection email. If that means my experience simply wasn’t there, I get that. But then did the cover letter really do anything?

I had one job interview this time around where the interviewer referenced my cover letter, and I was sort of shocked. I don’t know that I’ve ever had that happen before. It was pretty cool. At least I know that they read it!

Why I’d still rather not have to write them

I get that a good cover letter can help make your case. I do.

But writing a good cover letter takes forever. I carefully read the job description and pull out the bullet points that I think are important or that I have good examples for, leaving the points that are covered well enough on my resume. I go to the company website, see what makes them tick, see if they make any points that fit hand in hand with my own experiences. Then I try to craft the letter telling a story about why I want the position, how I’ve done work and have skills relevant to what they’re looking for, making sure to hit those relevant bullet points. After I do that, I have to go back and edit myself, condense my points, make sure everything fits onto a single page. Then I have to read again for proofreading purposes.

This whole process takes roughly an hour, sometimes more. Factoring in the entire application experience, applying to one job can take up to two hours.

That’s a long time! Especially because I am cramming in my job applications at night after the kids are in bed, after I’ve washed bottles and prepared things for daycare, sometimes after walking the dog or cleaning dishes or folding laundry. If I spend every weekday night doing nothing but applying for jobs that require cover letters, I might get in five applications over the course of a week.

The only reason I was able to apply for the number of jobs I did this time around was because I wrote cover letters for fewer than half the jobs I applied to.

And a couple of the ones I tried hardest on yielded no results.

There are plenty of reasons a cover letter can be helpful. I understand why someone might want one from me, especially because I’m often looking at content jobs.

But I’d still like to not have to write one and go to bed thirty minutes earlier instead.